The Football Fan app has launched its FanCoin® marketplace, and its looking great. The FanCoin® marketplace already has over 30,000 products from top brands like Kitbag from Fanatics Inc. and still counting, from official football kits and jerseys to hats and tracksuits, it has everything a football fan would ever want! But the number of products isn’t just the best thing about the app, it’s the way you can use your FanCoin® rewards to get money off the products you buy. However, first you need to collect them of course!

There are many ways to collect blockchain-secured FanCoin® on the Football Fan app, such as posting videos, photos and podcasts, creating Banter Rooms with fellow fans across the globe and sharing your football passion to the world. Signing up to the app will reward users with 50 FanCoin® and if users refer someone, both user and the person being referred will collect 10 FanCoin® each. As part of Web3.0 initiative, the Football Fan app recently granted VIP access to writers with the opportunity to write about football on the app. Depending upon the quality of the article, they could collect up to 1000 FanCoin®.

Football Fan app’s unique ecosystem creates a way for users to get money off football products by redeeming FanCoin® rewards that were collected on the app. It’s a great way to spend less and there are many products to buy in the FanCoin® marketplace. You can buy official products of several clubs like Manchester United, Chelsea, Arsenal, Tottenham, Liverpool, PSG, Barcelona, Bayern Munich, Real Madrid and many more clubs..

Earlier this year, the Football Fan app released their NFT platform, where any user can convert their owned content into NFTs to create revenue streams for themselves. In addition to the home screen, these NFTs are now also available in the FanCoin® marketplace.

Football Fan app aims to bring the global football community even closer by increasing interaction and engagement by making their utility reward FanCoin® available to everyone right before the FIFA World Cup. FanCoin® holders can convert their owned content into NFTs or buy other NFTs using FanCoin® on the app. FanCoin® can be redeemed against several official products such as the England team shirt along with over 30,000 products on the FanCoin® Marketplace on the app.

Football Fan app has partnered with Fanatics, Inc. to supply official products that are available on the FanCoin® Marketplace.

At the time of writing this article, the Football Fan app has rewarded its userbase with over 850,000 FanCoin® for their efforts resulting in over 29 million active engagements on the app. FanCoin® seems to become a popular way to engage with the fan community and reward them for their contribution, which has been missing from traditional social media platforms.

“We work in favour of our user community and therefore we created FanCoin® on the blockchain to reward our users for their efforts. Currently, our users can get cashback for buying products on our FanCoin® marketplace. However, we are onboarding products from over 200 high-street brands creating a complete FanCoin® system. This is to create an extraordinarily strong business case so that our FanCoin® holders can get the maximum value.”

If you haven’t tried Football Fan app yet – make sure you download it from the links below and start redeeming your FanCoin® holdings. 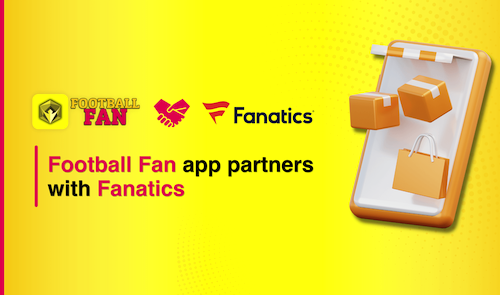