Football Fan, an innovative Web3.0 football social app and marketplace, is delighted to announce that Brandon Mason, wing-back for MK Dons, as their new brand ambassador.

Brandon, who has also played for Watford, Coventry City and in the Scottish Premiership, is a promising young English player, whose industry knowledge and expertise will be a real asset to the company as it continues to grow and engage with football fans globally.

The commercial deal with Mason has been done in the Football Fan app’s digital currency called FanCoin®. The agreement will see Mason play a regular role in the promotion and marketing of Football Fan across multiple channels, and he will also become a ‘VIP Creator’ on the app, allowing him to engage more actively with fans than on any other platform.

Mason will also receive privileged access to the company’s private sale of FanCoin®, a proprietary digital token for use on the in-app NFT marketplace, as well as access to future equity investment rounds.

The brand ambassador role will also deliver meaningful community engagement and benefit, as Mason will actively engage with fans, and especially younger fans, advising and supporting on the pathway towards becoming a professional athlete through the app.

Football Fan will also support Mason in his wider work outside of the game, providing promotional support for his new footwear brand, more information on which will be available soon.

Speaking on the announcement of the agreement, Amit Singh Rathore, CEO of Football Fan, said:
“When we met Brandon, we instantly connected with him, not only because of his football career but his entrepreneurship skills as well. He had so many ideas to share for the app and we felt he is the right brand ambassador for us. We can do so much with this collaboration where FanCoin® plays an important role in our Web3.0 ecosystem.”

Brandon Mason added:
“Happy to be a part of the Football Fan family! As a professional player and a fan of football, I believe having our community on one platform is what football needs.
Digital currency is the future and being able to create great content and be rewarded in FanCoin® is brilliant.” 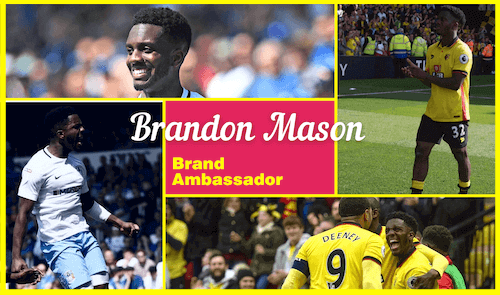