FIFA Football World Cup 2022 in Qatar is nearly upon us, the leading football social app ‘Football Fan’ launches its FanCoin® for private sale just in time for it.

Football Fan app that is owned by fans via equity shares has created a new way for fans to interact, engage, create, and be rewarded with their proprietary blockchain-secured digital utility token called FanCoin®. FanCoin® was first made available to Football Fan app users in January 2022 where fans collected FanCoin® for posting content, engagement, and gamification on the app. These blockchain-based FanCoin® rewards make the social app unique compared to any other traditional social media app.

And now FanCoin® is available for the Football Fan app community and stakeholders to purchase in the private sale ending on 31st October 2022. FanCoin® is priced at £0.01 per FanCoin® and community members can also buy them at a bulk purchase discount ranging between 5% - 20%, for a limited period only. FanCoin® private sale can be accessed via https://footballfanapp.com/fancoin-private-sale.

Football Fan app aims to bring the global football community even closer by increasing interaction and engagement by making their utility reward FanCoin® available to everyone right before the FIFA World Cup. FanCoin® holders can convert their owned content into NFTs or buy other NFTs using FanCoin® on the app. FanCoin® can be redeemed against several official products such as the England team shirt along with over 30,000 products on the FanCoin® Marketplace on the app.

What makes FanCoin® a game-changer is that it is backed by a strong community of fans and an extraordinary business case with real-life utility, unlike several other meaningless tokens. It also stands out in a way that it is not tied to any football club like several club fan tokens where the demand for those tokens is limited to their fanbase only. It is difficult to imagine an Arsenal fan buying Tottenham Hotspur’s fan tokens or vice versa. Whereas in the case of FanCoin® it is club or brand neutral making it more widely accepted by the community or anybody else in the world.

At the time of writing this article, the Football Fan app has rewarded its userbase with over 850,000 FanCoin® for their efforts resulting in over 29 million active engagements on the app. FanCoin® seems to become a popular way to engage with the fan community and reward them for their contribution, which has been missing from traditional social media platforms.

“We started with the concept of creating a platform that helps and rewards every effort made by the users, who are creators themselves. We never had millions in our bank account to reward creators, but we had passion and dedication to make a difference with our innovative thinking. So, we invented blockchain-secured FanCoin® where users are in control. We were very conscious about choosing the right name, getting the intellectual property rights, regulatory environment, brand reputation and most importantly doing the right thing in favour of the fans. We never wanted to create just another token else what’s the point in all the hard work we have done over the years? We wanted to create an extraordinarily strong business case so that our FanCoin® holders can get the maximum value. We took inspiration from successful public companies where their stocks return value to their holders. We have been very successful in bringing our vision to date and the future looks exciting. Once our legal and regulatory counsel gave us a go-ahead, we were ready to launch the private sale for our community to get the most benefit. Also, it was the right time to launch the private sale as it is the year of the FIFA Football World Cup.”

If you haven’t participated in FanCoin® yet – make sure you do so from the following link today: FanCoin® Private Sale. 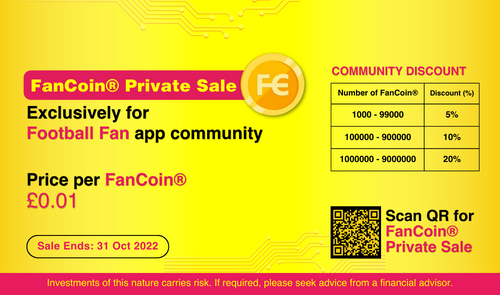